The facility opened in 1964, costing a reported $1.5 million to build. The track was originally named “Palm Beach International Raceway” and was owned by local contractor Joe Bucheck Jr. and his brother Edward. In March 1965 the inaugural race was held at the track. Some 10,000 spectators attended the event, which was a series of sports car events.

In September 1965, racing promoter Alec Ullman was set to move the 12 Hour Race In Sebring, which had been hosted at Sebring International Raceway for the previous 16 years, to the facility. Those plans eventually fell through due to the $1.5 million it would cost to expand the site.In November 1969 a controversial rock concert was held at the facility after months of legal battles. During the rock festival artists such as Janis Joplin, The Rolling Stones, Sly & The Family Stone and Jefferson Airplane performed. Since then, several artists including Eric Clapton have performed there. Another concert featuring Led Zeppelin, Bachman Turner Overdrive and J. Geils Band was in the works in 1975 but organizers canceled it when they decided the facility couldn’t handle the estimated 50,000 fans that were expected to attend.

In April 1971, the Grand American Series of Professional Drag Racing had one of the first major drag racing events held at the track. The facility hosted an air show November 7, 1971. The Air Force Thunderbirds were scheduled to perform but had to cancel due to flooding on the track. In 1979 famous sports car and Indy 500 racer Lyn St. James made her professional debut at the facility, which ended in a major accident in which her car crashed into the swamps and sank in the mud.

Dick Moroso the owner of Moroso Racing Parts, purchased the track and renamed it “Moroso Motorsports Park” in 1981. The following year Moroso spent a reported $100,000 to upgrade the facility to host the opening event in the SCCA Trans-Am Series. The facility was scheduled to host a circus in 1987, but it was canceled after promoters found out about a poor safety record.

The facility hosted several SCCA national and regional events. The track was also host to several IHRA and NHRA special events and the “Super Chevy Show” which drew more than 100,000 spectators over the three-day event for several years. The event was later replaced with the “All Chevy Show” which generally occurs in March. In 1996 Moroso considered spending $2 million on a one-mile oval track for stock car racing, but those plans fell through. In 1998, Moroso died from brain cancer and his family inherited ownership of the track. In 2002 MTV filmed a drag racing documentary at the track.The Speed Channel show Pinks visited the facility in 2007 to film an episode.

In 2008, a group of local motorsports enthusiasts purchased Moroso Motorsports Park. The new owners closed the track, remodeled it into a state-of-the-art motorsports facility and changed the track’s name back to “Palm Beach International Raceway.” The old facility was completely altered, adding a new road course similar to the original but with some minor modifications. Low-glare lighting was added to the track along with brand new safety barriers and a number of other upgrades. The track hosted an ARCA Remax Series event[12] and several drag racing events. The facility again hosted to the show “Pinks All Out” on March 6, 2010.The facility also hosts a wide variety of motorsports events, including “Mud Bog” an event for ATV and offroad enthusiasts CCS, Radical East USA’s racing school, Skip Barber Racing School, the Ferrari Cavallino Classic, Porsche BMW Owner’s Club (PBOC) and the Florida Sports Car Championship – Street Survival which teaches teenagers the driving skills necessary to survive on today’s roadways.

PBIR is popular with teams from all forms of racing for testing. Several IndyCar Series teams use the track for winter testing, as do several sports car teams from the Rolex Sports Car Series including locally-based Orbit Racing.[14] Once the track gets its FIA Grade 2 certification it will be eligible to host a wide variety of motorsports events including IndyCar Series, Indy Lights, Grand Am and other major forms of racing. 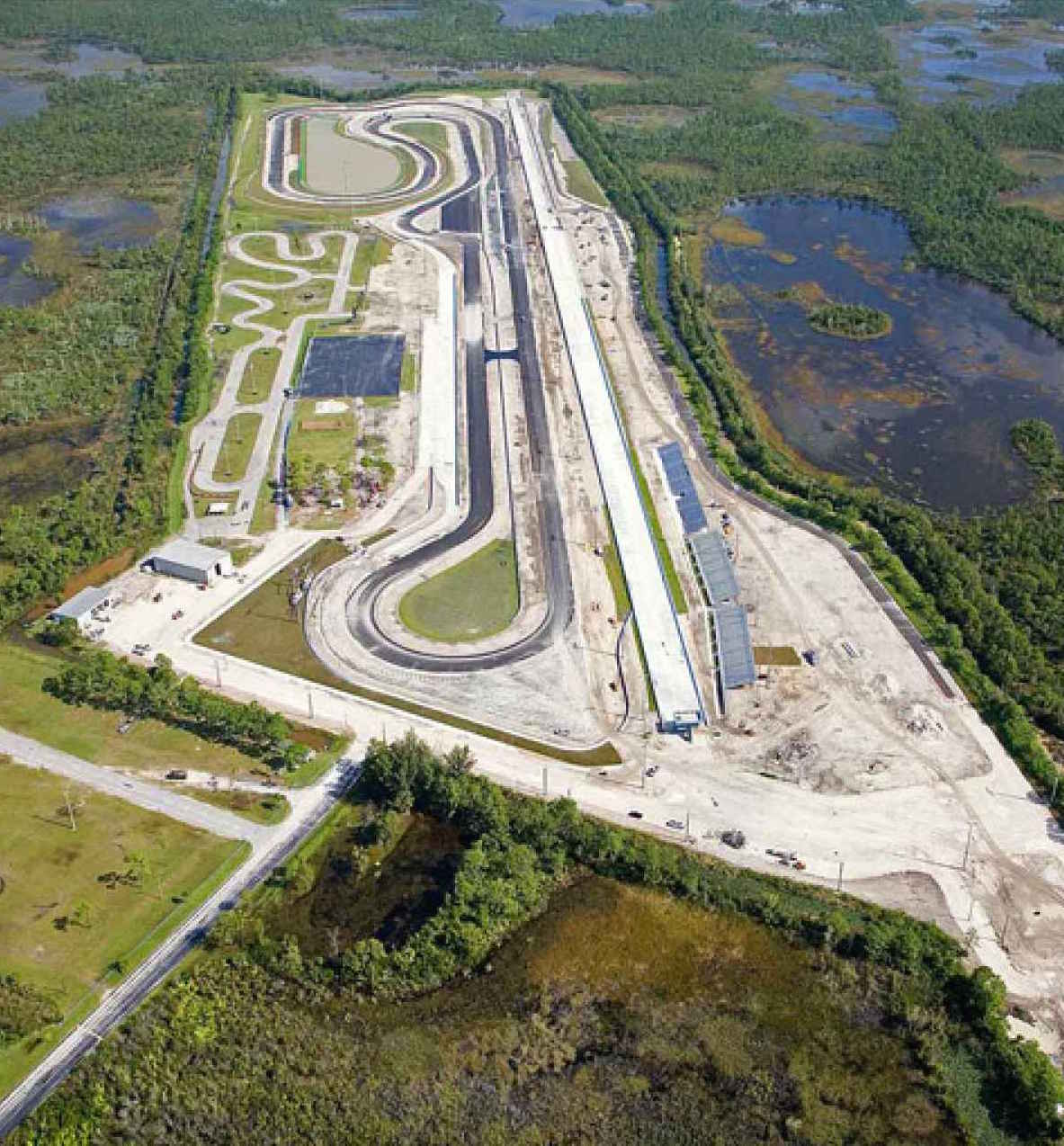